I’m a slacker. I am behind on my blog posts by about three weeks. And I am behind in my marathon training by about 2 weeks and 6 days.

In order to face my slackery head on, I’ve decided to write it all out for the world (aka the three people who read this blog) to see. That said, I’ve really only got one running story for you in this entire blog. You can find it in the section labeled “VACATION”. Ironically enough.

On February 18, 2012, I ran 17 miles. It actually ended up being 18. It went alright. I averaged an 11:30 pace AND had negative splits. For those of you who are wondering, negative splits are when the second half of a run is as fast as or faster than the first half. I was really delighted about this!!

And then… life happened.

2/19: I got sick. Again. Tonsils the size of melons. Doc said it was “viral” which is code for: F**K I have no antibiotics.
2/20: Still sick. Tonsils so swollen I can’t breathe properly. Not good for running.
2/21: … And it’s getting progressively worse.
2/22: Back to the doctor AGAIN. Two visits and two co-pays later, I discover that, in fact, my uvula (little ball hangy thing) was infected and that doc #1 should have prescribed me antibiotics. On top of that, an hour and a half drive to Providence for  rehearsal left me ZERO time to pick up my meds at the pharmacy.
2/23: Spent my lunch hour getting prescription filled so that I could be well enough for my evening gig in Boston. (For those readers who aren’t aware, I am a singer!)
2/24: Drove to Vermont to see a dear friend from college in a performance. After traffic and a surprise snow storm (thanks Weather Channel?) it took my 4 hours to make a 2 hour drive. Both ways. Did not get home until 3:30am. Awesome.
2/25: Should have been an 18-miler. But on 4 hours of sleep while being sick, I decided to shut my alarm off and get rest. Not to mention, I had a wedding to perform on the Cape that day. I can’t get “a little bit softer now” if my legs are too sore.
2/26: Flight to California. Run 18 miles before I get on a plane? Nope.

I managed to squeeze in one 12-mile run along the sunny beaches of California. It was during that time which I was followed and creeped on by a random jogger. He came out of nowhere when he appeared at my side proclaiming “I am a pro boxer!” before offering me a personal massage at his house. When he asked for my number, I told him that I had to go take a poo in the port-a-potty. He ran ahead.

So there you have it. I have slacked. And this coming weekend is supposed to be 19 miles, my second-to-last long run before we taper. I would be lying if I said I were confident… but I am going for it anyway. I’ve gotten quite a few comforting opinions from seasoned runners and experienced marathoners who’ve said it really won’t make that much of a difference as far as my preparedness. If they are wrong, then I know where they live.

So, I’ve got no running stories for you today. But, enjoy some of my photos of Napa : ) Because my next blog post might not be too pretty… 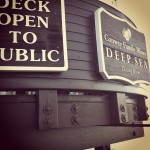 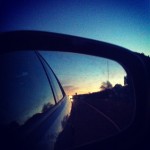 The walls of Prager were covered in dollar bills. Great ports here.

Raymond Winery had some really cool things going on.

I found my birth year on the wall of vintages at Raymond Winery. (But…it’s backwards)

Sea lions while on a harbor cruise!

My sister, Krystle (right), Jesse, and me (left)

← 16 miles. How to keep running when you feel like stopping.
15 miles. Staying in the moment. →